Having spent almost two seasons at Wembley, Tottenham Hotspur have now moved into their new home, currently called Tottenham Hotspur Stadium. This state-of-the-art stadium is built on the site of the old White Hart Lane.

The stadium includes the world’s first dividing, retractable pitch, with a synthetic pitch underneath for use during NFL games, concerts and other events. The single tier in the South Stand was influenced by Borussia Dortmund’s ‘Yellow Wall’ and with a capacity of 17,500, is the largest in the UK. Among the modern facilities are 60 food and drink outlets, 1,800 video screens, and the world’s first microbrewery based in a stadium.

Away fans visiting the Tottenham Hotspur Stadium are located in the North East corner of the stadium, with a typical allocation of around 3,000.

With Tottenham Hotspur Stadium being new in 2019, we know fans will be keen to see how it looks. We’ll be adding new images to this section as people send them in. If you have an image of the new stadium you’d like to share, please email it to info@awaygames.co.uk 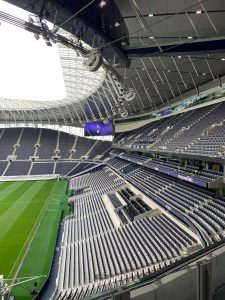 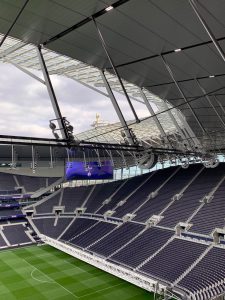 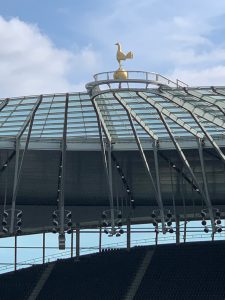 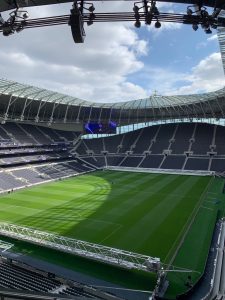 For directions to the Tottenham Hotspur Stadium (N17 0BX for Sat Navs) from wherever your journey starts, just type in your postcode or starting location here:

An extended Controlled Parking Zone (CPZ) is in operation around the Tottenham Hotspur Stadium, making street parking almost impossible on matchdays. There are some private car parks around the ground charging between £10-£25 and if you’re willing to walk a bit further, there is some street parking a little further away from the ground in the Enfield area.

Alternatively, we’ve compiled a list of car parks, below, near to the Tottenham Hotspur Stadium for hassle free parking while you’re at the match

The nearest over ground railway station to Tottenham Hotspur Stadium is White Hart Lane Station, which is served by trains from Liverpool Street, and will only take a few minutes to walk. Simply head along White Hart Lane for around 150m then turn right on to High Road. As you walk down, you’ll see Tottenham Hotspur Stadium appear on your left after about 200m. The other option is Northumberland Park, which is a really straightforward walk which will take about 5-10 minutes to walk. Exit the station on to Park Lane, where you’ll keep going for around 800m, then take a right onto High Road, where you’ll see the stadium on your right.

If you’d rather connect at Kings Cross on the London Underground, the nearest stations to Tottenham Hotspur Stadium are Tottenham Hale and Seven Sisters, which are both on the Victoria Line. Both stations are around a 25 minute walk. On street way finding signage has been installed at all four major connecting underground and overground stations.

If you don’t fancy that, then your options are to either catch a bus (149, 259, 279 or 349) on Tottenham High Road to the stadium, though these routes are subject to diversions so please check on the TfL website before travelling.

The club itself have named The Elmhurst as the designated away pub, although our enquiries show that at least another two are happy to admit away fans. We will monitor the situation closely and add more away pubs as the situation becomes clearer. Please note, however, that some bars require club colours to be covered and some do not allow children.

Over the coming months we will be building up fans reviews of the best places to drink on an away trip to Tottenham Hotspur, and you’ll be able to find them here.

In the meantime, we’ve included a map below with the away pubs near Tottenham Hotspur Stadium highlighted for you.

London offers a variety of overnight accommodation to suit all budgets.

See what other away fans think of the Tottenham Hotspur Stadium in our ‘Away Day Reviews’.

See how Tottenham Hotspur perform in our away day rankings, where away fans rate the pie, pint, cuppa and away day overall.