Don’t just take our word for it when it comes to the best ways to get there, where to park, where to stay, or which pub to go when you’re going to see your team play Barnsley away. Find out what other away fans thought of their visit to Oakwell in our away day reviews.

I chose to go to this game as I am a season ticket holder at Luton Town and I go to home and away games to support our club and get behind the lads – win, lose or draw. It was special day because we sold Cameron McGeehan to Barnsley in 2017 and it’s the first time he has played against us after his sale. I know it’s taken him a while to recover from his horror injury so it was nice to see him back playing.

I travelled down with our supporters club, which is called the Bobbers Supporters Club. As we left Luton at 7am for a 12pm kick off it was fairly easy and not much traffic to deal with until we arrived in Barnsley but even then it was ok and we got parked up fairly easily and the stewards at Barnsley were very organised.

As we arrived in Barnsley at 10.30am for a 12pm kick off, we didn’t go to any pus beforehand as we weren’t sure they would be open so we went straight into the ground and had a beer or 2 in there. The atmosphere was okay but because it was live on Sky, a lot of fans chose to stay at home to watch the game.

We got food at the game and prices were very good and reasonable compare to a lot of the stadiums in League One – even ours!

The away end looked near enough sold out and for an old style ground it looked decent.

I thought Barnsley were fairly quiet until they scored and then they were all singing but each time we pulled a goal back they went into silence.
We were noisy even when we was losing but not as noisy as we have been because a lot of our fans chose to watch it on TV. We took around 800 away fans when we normally take between 2,000 to 3,000 so it was good but with the game being televised it killed the atmosphere a bit.

8/10 – I spoke to a few of their fans after the game they were friendly and polite and had different views. Some said we could have easily had a draw and some said they deserved the game easily.

It was fairly easy getting out the stadium. The stewards and police had it under control and there was no trouble at all.

The ticket cost me £10 so that was very good of Barnsley only charging that and travel on coach was £25 so that was fairly cheap. Drink and food was quite cheap there so I spent around £25 so altogether around £60. Most away games cost double that and more!

Yes I would recommend this away day to other fans. They are a friendly bunch of fans and the stewards were great. You could talk to them easily to get in and out of the stadium and the police were good as they spoke to us as well and all made us feel welcome.

Photo’s submitted from away fans on their visit to Barnsley: 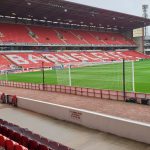 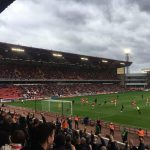 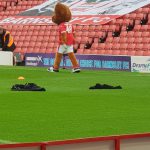 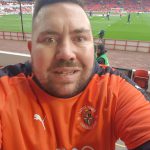 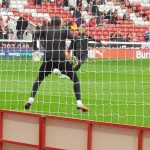 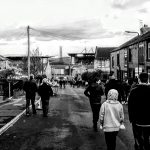