Don’t just take our word for it when it comes to the best ways to get there, where to park, where to stay, or which pub to go when you’re going to see your team play Bradford City away. Find out what other away fans thought of their visit to the Utilita Energy Stadium in our away day reviews.

I chose to go to this game because i’m a Newport County season ticket holder so i wanted to go. I was looking forward to the game because Newport hadn’t won a game in a few, but so had Bradford.

We travelled up on the NCAFCSC (Newport County AFC Supporters Club) coach. We broke down just 4 miles from the ground and we had to wait for a fleet of taxis to pick us all up and take us to the ground. It was easy to find the away section as there were very nice stewards who showed us the way.

We didn’t go to a pub before the game however, we all went to the Bradford Arms after the game where we were escorted by police and we had to wait for our coach to pick us up. The atmosphere however in the stadium wasn’t as good as you’d think it would be for a ground with a big capacity. Despite the fact that only 14,000 fans turned up (including 350 Newport County fans).

I thought that the food and drink inside the ground was very overpriced. A pint of beer was £4.50 and sausage rolls were nearly £3/£4 per one. However, the people serving us were really nice and helpful.

The away end was good and our view of the game was top notch.

It wasn’t as good as what I expected.

It was easy as we had a police escort to the pub so we had no trouble.

I definitely would as it was a good experience overall.

Photo’s submitted from away fans on their visit to Bradford City: 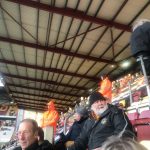