Don’t just take our word for it when it comes to the best ways to get there, where to park, where to stay, or which pub to go when you’re going to see your team play Everton away. Find out what other away fans thought of their visit to Goodison Park in our away day reviews.

I have been going regularly so far this season (long may it continue), but I was excited for this one as Goodison Park is meant to be a really tough ground to go to and I was looking forward to seeing it before Everton get their new ground which looks amazing.

I took the coach, and while Norwich is miles away from everywhere this one was particularly long – traffic was pretty rough getting in and out of Liverpool and there were a lot of fans walking near where the coach was parked making it tough to get away from the ground. M62 was also closed for some of it which didn’t help, but it was long either way. Seems to be decent parking for coaches though and it is very close to the away end and Anfield which was cool to see.

We ate inside the ground and it was about what you would expect I think – £5.50 for a pie with a soft drink or £7.50 for a pie with a beer. The pie was pretty good to be fair, they also had scouse pie but I have no idea what that is so I avoided it.

Away end was quite cool I thought, there was a lower section where the rows are numbered and a higher section where the rows were lettered, and in the upper section (where I was) the seats were wooden which I haven’t seen before. I think they also make the upper tier available for away fans when they need it, however I’m a Norwich fan so that wasn’t necessary! The view was pretty good where I was, not sure what it was like at the top of the tier but the roof went very low so I think some of them might’ve been tough to see from, especially since everyone was standing as you’d expect. The other thing I noticed was that the rows weren’t very steep, so if there was a particularly tall person in front it might be tough to see.

Home fans were the quietest I have seen so far this season, the ground was full but they weren’t singing and there was no banter between the sets of fans at all even though we tried. Away end was good but that will vary from team to team.

7/10 – no problems with any of them, didn’t talk to many of them this time though to be honest.

Pretty simple to be honest for the coach, there are quite a lot of people and I think some of the roads out are fairly narrow but they close off the one right near the away end and there was a lot of police around to keep everyone moving.

Definitely, Goodison has a lot of character and while I can see that it is definitely time for Everton to move on since it is a little dated in places I am so glad that I got to see it before it goes, especially since Norwich are getting relegated so it will be my last chance most likely. Atmosphere is rubbish but apart from that it was an all round good day.

We decided to go and have a look round Anfield before the game and I am glad we did – was very cool to see how close the 2 grounds are and Anfield was very impressive – I will definitely be back in Liverpool later in the season. The park in between the 2 grounds is cool and a good place for a photo that I would definitely encourage visiting, you can see the big letters saying Goodison Park in places and then you can see Anfield as well. Also, I wish I’d gone into Liverpool to have a little look around. Such is the case in many bigger cities the ground is sort of in the outskirts so if you plan on getting the train I would try and get a little bit of time in Liverpool as well as I have heard that the city centre is really nice.

Photo’s submitted from away fans on their visit to Everton: 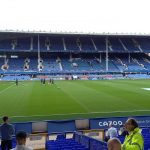