Don’t just take our word for it when it comes to the best ways to get there, where to park, where to stay, or which pub to go when you’re going to see your team play Leicester City away. Find out what other away fans thought of their visit to the King Power Stadium in our away day reviews.

It was a Carabao Cup night match and I knew there would be a large allocation, so we were in for a good atmosphere.

The journey down the A50 was very smooth and hardly any delays. This changed when we got into the city. The entire city was gridlocked!!

It was near impossible to find a parking space meaning we missed kick off despite leaving Manchester with plenty of time.

Couldn’t get to any pubs as we were so late!

I had a burger inside the ground and I must say it was quite good value.

It was very good although the queuing system was absolute bedlam.

My view was fantastic, the steps are quite steep at Leicester’s away end. The away supporters are housed in one corner of the ground, though this being a cup game our fan had space from the corner to near enough behind the goal.

It is still to this day one of the best atmospheres I’ve ever experienced at a game, we didn’t stop singing and neither did the Leicester fans. We even did a Poznan!

It was fairly easy to get away from the ground although the traffic was awful again.

Photo’s submitted from away fans on their visit to Leicester City: 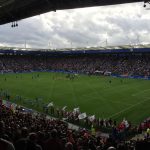 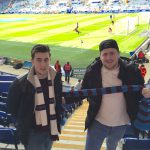