Don’t just take our word for it when it comes to the best ways to get there, where to park, where to stay, or which pub to go when you’re going to see your team play Manchester City away. Find out what other away fans thought of their visit to the Etihad Stadium in our away day reviews.

This was the first away game for us after Covid that was available and it is a good ground and guaranteed to see some good players at Man City.

I took the train, which made for a long day. Train home was cancelled so had to take 5 different ones to get home which was ridiculous and expensive.

I arrived into Manchester Victoria which was around 2.5 miles in the rain – there is a tram but was busy and probably slower so couldnt be bothered with that. Went back from Manchester Picadilly which was about half an hour away.

I went to a shopping mall in the middle of Manchester and ate Mcdonald’s so was very standard.

Was alright, didn’t really look at the food but they gave me my drink for half price for some reason so I was happy but even at full price they are not too bad.

Away fans are in the corner over 3 levels I think however they were only in 2 levels when I went. I was in the higher one which still was a decent view. Could see the game well with nothing blocking my sight.

Pretty dry from the home fans considering they won 5-0, our fans were quiet too which isn’t surprising.

Wasn’t too bad, there was lots of people but most roads around the ground were shut and then just flooded with people even after that. Think it would be a nightmare for cars.

About £90-£100 which was awful I thought, mainly the trains fault though.

Alright away day to be honest, Manchester is a good city and it is a class ground – atmosphere is dry but good day out.

Photo’s submitted from away fans on their visit to Manchester City: 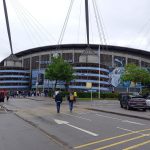 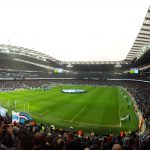