Don’t just take our word for it when it comes to the best ways to get there, where to park, where to stay, or which pub to go when you’re going to see your team play Morecambe away. Find out what other away fans thought of their visit to the Mazuma Stadium in our away day reviews.

I went as I am a season ticket holder of Newport County. I was looking forward to this game as I was confident because Morecambe were bottom of the league. We hadn’t won for 6 games and I was confident that we were going to win.

We travelled up on a coach and it was easy. Last away game we played our coach broke down 4 miles from the stadium. Luckily, this time it didn’t.

We went to the Hurley Flyer which was right next to the stadium. The atmosphere in the pub was ridiculous. Half of the home fans were in there! It was the most ridiculous jam-packed pub that I’ve ever been in!

I ate in the ground. I ate a pie and it was really good and the prices were good for a football match.

The food and drink was really top quality inside the ground.

Our view was ok in the stadium but the away end was too small to fit all our travelling fans from South Wales. We took up loads of fans and weren’t allowed to use the standing section.

The atmosphere wasn’t up to my expectations. It was ok but I felt like I was too far away from the action when the players were all up the other end of the pitch.

The home fans weren’t really friendly as when we left they were shouting abusive stuff at us.

In total, other than the ticket, I spent approximately £15 as it was all reasonably priced.

I would recommend this away day to other fans. However, it is a long way to travel. For us it took a total of 4 hours and 50 minutes to get there.

Photo’s submitted from away fans on their visit to Morecambe: 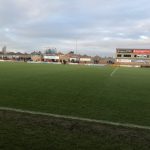