Don’t just take our word for it when it comes to the best ways to get there, where to park, where to stay, or which pub to go when you’re going to see your team play Newcastle United away. Find out what other away fans thought of their visit to St James’ Park in our away day reviews.

Newcastle is one of my favourite away days as the ground is right near the middle of the city, and although I’d hate to sit there every week it is quite fun to sit up in the heavens!

I got the club coach. The pick up and drop off point is pretty good but the traffic was a little bit dodgy this time. It was a 7.30pm kick off though so I think we hit rush hour pretty badly.

We ate at a sushi shop, called Nudo Sushi Box (if I remember correctly!). Doubt that this is a common venue for away fans but we stumbled across it and as it was closing at 7pm and we got there at 6.30pm almost everything was half price so I got loads of sushi for like £8.

It is fine, pretty standard choices for a football game. I know it is standard practice at away games but I find it very ironic that they take the bottle lids as you would have to be an Olympic champion thrower to reach the pitch from where they sit you if you tried to throw it!

This was my second time at Newcastle, the first time was in the day time and I really enjoyed the view of not only the ground but also the surroundings (it was a 0-0 and a dull one at that), but this time we were about 3-4 rows from the back and I wasn’t so big of a fan. I also think it creates a lack of atmosphere between the home and the away fans being so high up, especially since the stand in front of us is apparently the family stand! It always seems like that loud ones are opposite which is a shame. Also it is probably because we are Norwich fans but we all had a hard time working out which number corresponded to which row, I don’t remember why it was unclear now but everyone was very confused.

It was a Tuesday night game about 6 hours away from us, so there was only about 1,200 of our fans there. Newcastle had a man sent off very early and still went 1-0 up, so we were irritated and for a large part of the game so were they. Livened up a bit in the second half. Like I mentioned earlier I think the away end is opposite and way higher than the loud bit, but when the whole ground gets singing it is still very loud. But I do think it makes it hard for there to be much of an atmosphere between the home and the away fans due to where we are sat.

8/10 – would be 10 as I always find a Newcastle fan to have a chat with home and away but we got shouted at quite a bit after the game!

It was alright, there is like a line of stewards when you first get out separating you from the home fans which seems fairly unnecessary but the coaches are pretty close, and there wasn’t much traffic at that time of night.

I think it cost about £80 – fairly expensive compared to most for me as since I’m 17 I don’t buy adult tickets or spend money on pints, if I was an adult it would’ve been £78 just for ticket and coach. I’d do it again but there have been games that I have thought were better value.

100%. St James’ park is iconic and I would put it easily in my top 5 favourite grounds, the people are really nice and the area is great as well, which is something you can’t often say with football grounds! Shame about the football but that is what I get for being a Norwich fan.

This was the number one away game on my list as I live nearer to Newcastle than London these days.

Got the train to Newcastle Central from Edinburgh. Took 90 minutes.

The ground is in the city centre and is an easy 10 to 15 minute walk from the station.

Earl of Pitt St. Atmostphere was laid back and as an away fan, I had no trouble at all.

Went to a well known restaurant chain in Eldon Square after the game, so value as expected. Mix of home and away fans in the restaurant and again, no trouble.

Got a hot dog in the stadium and was average.

Away fans are in the top tier of the Leazes stand. The view is incredible, but I heard comments that some younger fans were a bit scared of the height. The stewards were also very good. Strict when they needed to be, but overall very helpful and friendly.

The Brentford fans were loud and singing all the way through the match and the banter with the home fans was mostly good natured.

Was very crowded coming onto the Gallowgate, but was relatively easy to make you way back to the city centre.

Including the £30 ticket, travel, food and drink the day cost me around £90.

Is there anything else you want to tell us about your day?

This was Eddie Howe’s first game in charge of Newcastle, so lots of excitement and expectation around the ground. The game was a very entertaining 3-3 draw. Newcastle fans I met were friendly and welcoming.

Photo’s submitted from away fans on their visit to Newcastle United: 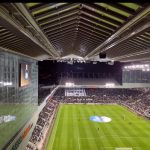 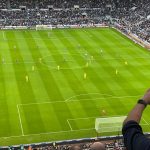