Don’t just take our word for it when it comes to the best ways to get there, where to park, where to stay, or which pub to go when you’re going to see your team play Plymouth Argyle away. Find out what other away fans thought of their visit to Home Park in our away day reviews.

Even though it is the longest trip in League 1 from Sunderland down to Plymouth, we were looking forward to it, and it turned out to be well worth it!

A car full of us made the 8 hour drive down to Plymouth the day before the game.

We were staying the City Centre but got a taxi to a pub near the ground and once we’d had a few beers we wandered along to Home Park.

The night before the game we went for a few pints and an Indian at the impressive Everest Spice.

What away pubs did you go to and what was the atmosphere like?

On match day we started at the Gog and Magog Wetherspoons which was starting to fill up with Sunderland fans from 9am. We then got a taxi to The Hyde Park with it being closer to the ground. This is a decent little pub situated on a roundabout with plenty choice and a short walk from the Hyde Park social club which welcomes away fans for £2 entry. So much so we were turned away at the door as it was full so headed along to the ground.

After a solid 2-0 win we headed towards the train station and sank a few in the New Market Tavern. It has a juke box and pool table which kept us busy whilst watching the late kick off on sky sports. From there we went to Walkabout which held plenty but we only ended up having 1 round after getting told by the bouncers to stop singing football songs! We finished the night back in Parade which has about 8 bars including a night club of sorts called OMG.

Home Park is currently undergoing major refurbishments to one of it stands so the 1,400 Sunderland fans were put in a section of the Barn Park End. It provided a great view of the pitch with no obstructions but with a full home stand missing the home atmosphere suffered slightly.

8/10 – Didn’t speak to that many, and some were probably laying low after the match having got beat.

An easy and quick getaway from the stadium, then a short walk to either taxis or the nearby station. We stopped at a few pubs as we made our way back.

If you stayed over, where did you stay and was it convenient for getting to the stadium?

We booked 2 nights in the Jurys Inn located in the centre, which was very well located to get to Home Park.

Ticket was £20 and then probably about £100 for food and pints, and then the cost of staying over and fuel.

Yeah, definitely a good away ground to tick off but I would 100% recommend staying over.

Photo’s submitted from away fans on their visit to Plymouth Argyle: 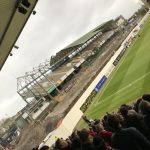 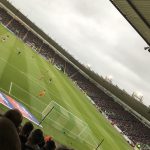 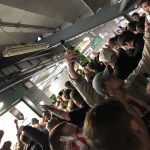