Don’t just take our word for it when it comes to the best ways to get there, where to park, where to stay, or which pub to go when you’re going to see your team play Sunderland away. Find out what other away fans thought of their visit to the Stadium of Light in our away day reviews.

We chose to do this game mainly because it is situated right next to Newcastle which is a cracking night out. Also the stadium is really nice for League One!

We stayed in Newcastle so we got the Metro to Sunderland. It was really easy. Probably about 12 stops away and direct. It cost about £5.30 for a day ticket.

It was about a 15 minute walk from the metro stop to the stadium.

We got there quite late so we stopped in the Hilton Hotel right next door to the stadium. There were a fair few fans in there and they had a bar that served alcohol. They also had football on the telly. Atmosphere was relaxed.

We got Chicken Balti Pies at half time. They cost about £3.50 (I think) and it was really nice! Good selection of food and beers. They have a few bars so didn’t take long to get served.

It’s a really nice stadium. The away fans are on the top tier so it’s a great view.

The atmosphere was good as the home fans fill out the stadium. The roof is quite low above the away fans so it sounded incredible when we were singing.

No trouble from anyone but didn’t speak to anyone either. 6/10?

We left early as we were down to 10 men and 2-0 down! The Metro runs often so we were able to grab one pretty quickly. I can imagine it would be busy at full time though.

If you stayed over, where did you stay and was it convenient for getting to the stadium?

We stayed in Newcastle for the nightlife. Very convenient to get the Metro straight to Sunderland.

As we stayed two nights and we flew from Bristol we ended up spending about £200 in total. On match day we spend about £30. Adult ticket prices were a bit expensive but that is to be expected.

Yes, although there are a LOT of stairs to get to the top tier away end – be prepared!

Photo’s submitted from away fans on their visit to Sunderland: 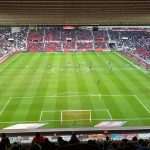 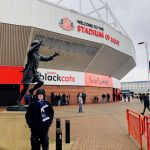