Don’t just take our word for it when it comes to the best ways to get there, where to park, where to stay, or which pub to go when you’re going to see your team play Tottenham Hotspur away. Find out what other away fans thought of their visit to the Tottenham Hotspur Stadium in our away day reviews.

Train from Liverpool Street to White Hart Lane, quite straight forward but busy.

No pubs near the stadium for away fans so went straight to stadium.

Pretty decent in the stadium to be fair – I had a nice Burrito and for a decent price. Better than we get at Stamford Bridge.

Great view – second tier to the left of the goal.

It a great looking stadium but soulless due to the size i guess. Away fans were by far the loudest.

Nightmare. Game finished at 10pm and the police made sure the fans were kept apart by sending us on a 2.5 mile round trip walking to Northumberland Park then round to Seven Sisters while all the time stating the were getting us to Tottenham Hale.

On a Weekend yes but on a Week day evening it’s a horrible place to get back from unless you are heading East.

Spurs lost for the second time in 7 days to the only team in London with a European cup – So that was nice.

The new Spurs ground became instantly top of my list to visit, and although Norwich had played there before this was my first trip there. I also saw it being built on the way home from Arsenal, and then I saw it from the outside the next time so I was really excited to see it properly.

I travelled by coach, it was the easiest away day of the entire season as a Norwich fan and I’d imagine this would be the case for many teams north of London. Parked in an industrial estate nearby with an absolute tonne of other coaches (I’m guessing all the Spurs supporters clubs) and dodgy looking car parks that were charging obscene amounts (One said £15, I don’t remember but some might’ve said even more than that!).

I was amazed to see at least 3 different food stalls in the away end, I think 2 of them were selling the exact same stuff and then the one that we went to had fish and chips among other stuff. It was around £9, and it was much better than expected to be fair. As someone from Norfolk where we are completely spoilt to choice with coastal towns and fish and chip shops, it didn’t live up to those, but that is to be expected. So while on the pricey side the food was good and there were a lot of options.

The away end was good, it is very similar to Arsenal in the sense that it is in the corner on the bottom tier. The concourse although not important was by far and away the best in the league, as is the ground itself. We were close to the action, and I thought that for 3,000 people this away end felt fairly compact which I was a fan of. The lower tier wasn’t that high so I would assume all away fans get a good view of the game.

The away end was dead, albeit not at all helped by the football. Not sure why our fans weren’t up for this one as the numbers were good. As for Spurs, they were better than I expected, grounds like this can very easily feel soulless (Man City) but that single tiered stand opposite the away end is awesome, and when they are all singing it is good and loud.

I thought we would be alright since we were towards the outside of an industrial estate, but actually we were stuck in traffic for at the very least an hour. Can’t really fault Spurs for this, it is inevitable when there are 60,000 people trying to get out of a small space in London.

I think it was like £60. Absolutely worth it for a ground of this calibre.

The security checks, although necessary, are very very tedious which leads to long queues. None of the stewards on entry want to be there and they are quite unfriendly, it feels like you are sheep being herded, and it takes forever to get in. However once in, the ground is easily the best in the country.

I went because it was Villa’s return to the Premier League and to see what Spurs’ new stadium is like.

I travelled by coach and it was fine.

We went to the Haringey Irish Centre as the known pub for away fans (Elmhurst) was closed down. The Irish Centre was fine and accommodating.

Not a great choice but to be fair I only tried to get food at half time so supplies could have been low at that time.

Yeah, it was a good view. Spurs doing what is right for them and tucking the away fans in a corner which I don’t blame them for.

I thought the home fans were very poor to be honest. When you consider it was the first game of the season and it was their first game since the Champions League Final, you’d have expected them to be really backing their players but they never seemed to until they scored.

It was a bit of a walk to the Coaches which were packed on West Road. The stewards set up to direct the away fans didn’t seem to have a clue.

I’d say I spent in excess of £100, and it was value for money. Much cheaper than being in the Championship where we were fleeced for 3 seasons by the Yorkshire clubs.

I certainly would. There was never really a hint of any serious bother, and it’s a wonderful stadium to watch a football match in. However, it did have that corporate feel to it which is far from what White Hart Lane was like.

The stewards at the ground were pretty poor. They never seemed to have a clue with what was going on. I know at Villa and many other clubs the stewarding is done by fans and so their knowledge of the ground and surrounding area is very good but this wasn’t the case here.

Photo’s submitted from away fans on their visit to Tottenham Hotspur: 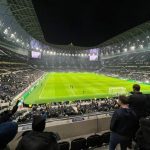 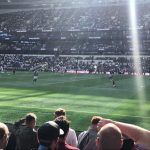 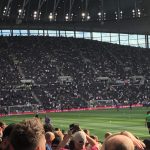 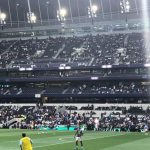 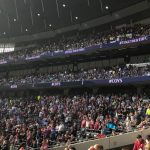 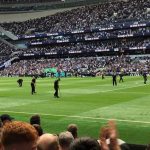