Don’t just take our word for it when it comes to the best ways to get there, where to park, where to stay, or which pub to go when you’re going to see your team play Wolves away. Find out what other away fans thought of their visit to Molineux in our away day reviews.

I really wanted to go to a new ground and Molineux is a stadium i’ve never been to, so it ticked a box in that respect. Also, night games are always great so when it was moved to a Monday night, it was ideal.

We drove down from Newcastle for an evening kick off. Took around 4 hours but was a straightforward journey and we had left plenty of time for our journey. Only bit of advice if you’re coming from the North is that there is a toll road on a section of the M6 which cost £6.20 and we were literally on it for a mile, so you might as well avoid that if you can.

We parked in a pre-pay car park called St Georges (WV2 1AY) which was only £4. It was then just a 10 minute walk to the away pub, the Bluebrick. However, we did find out later on that fans can actually park at the Bluebrick for free if a customer of the pub. Overall though i’d recommend the car park we used as it was a quick getaway after the game.

What away pubs did you go to before the game and what was the atmosphere like?

We went to the Bluebrick which is pretty much the only pub that will admit away fans when going to Wolves. The atmosphere was good and there were home fans in there too but no sign of any trouble so it was good natured.

We ate in the Bluebrick, which was really nice pub grub. Main meals were like £10-£15 but really good quality.

Didn’t eat the food, but the only lager available was Carling which wouldn’t be my normal choice. Normal prices, around £4.50 a pint.

Really good view from the away end. I’m used to being behind a goal in the away end so it was a decent change to be in a stand that runs along the side of the pitch. Our fans took up the whole pitch length of the Steve Bull Lower Stand.

Wolves put on a light show before the game and at half time to drum up atmosphere which was a bit unusual. During the match, the atmosphere even in the away end wasn’t great, but it livened up in the second half, particularly when the goals went in. When they got their last minute equaliser, the home fans were clearly happy while we trudged out of the stadium a bit dejected.

10/10 – we bumped into one on the way to the stadium who was showing us the best way to get there and had some banter with him about the game.

It was straightforward getting away from the stadium after the match, and was just a 10 minute walk to the car park from the stadium. Then we were straight out and away onto the motorway.

I’d definitely recommend this away day. Molineux is a very traditional stadium but has a wonderful feel about it. 100% worth a visit.

Photo’s submitted from away fans on their visit to Wolves: 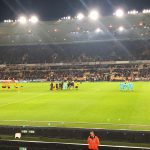 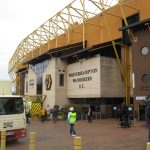